So with my service engineer isolating himself, I thought as the caravan had not been moved for over a year I’d give a once over to make sure we can get away as soon as allowed.

Job one, check the stabiliser pads these looked fine, so gave them a rub down and a clean with brake cleaner, and although nothing is said I gave the bearing and washers a little covering of gold high temperature brake grease (surprised I found the tin as I have not serviced my cars brakes for over 20 years) and a clean again with the brake cleaner to ensure there is no grease on the pads. Then as is my way these days I took then apart again to check I had put the washers back in the right order (if a jobs worth doing it’s worth doing twice). To see how to check the pads see the article in repairs

Then on to the gas, to find no gas is getting through to the appliances, after checking the bottle (still nearly full) and all taps are on, still no gas!! Which now I believe leaves just the regulator, I was told on the caravans first service that the regulator is too low to the bottle height, as the impurities in the gas can block it if I am not careful, and was advised to leave switching on the gas for a while after travelling, to allow the impurities to settle back down in the bottle. I have always done this but I guess until I can get it checked properly a new regulator could be needed.

So next on the list is the water pump and taps, the boiler filled up no problem, then came the mad dash round the caravan turning off the taps I had left on when draining the system for the winter. After mopping up the shower/toilet area and getting myself dried all looked OK. Time for a cuppa as we sat out in the sun we heard the pump switch on!!!, when I checked the sink tap it was running slowly although in the off position, then sods law took over and it was just the same in the on for hot water position.

Time to investigate which was going to be a pig of a job if it needs replacing due to on my last tap change I used gorilla glue to seal all the connections as it sets with water as I thought it would make a good seal.

So before I started I found the old tap and took it apart to see how it works, (the problem with this tap was the hot water pipe connector leaked so why did I not think to swap the connectors before I ordered a new tap) 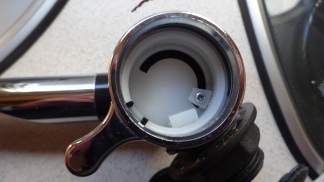 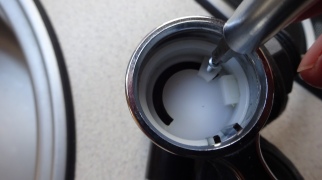 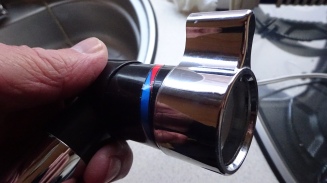 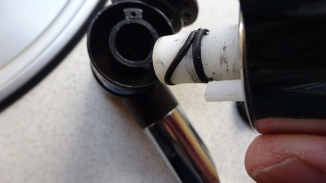 and the handle is removed showing the two holes for hot an cold water supply and the plastic lever that moves the micro switch and a fancy o ring to stop leaks. 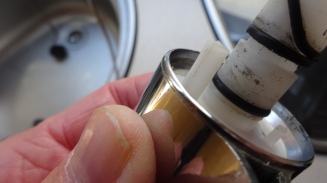 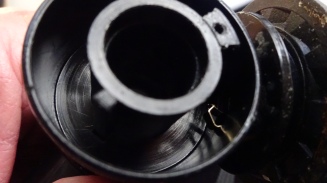 So on to do the job, first I thought I’d check the tap, as it is tight to get a normal screwdriver in due to the sink being close I used an electric screwdriver attachment this way I managed to undo the retaining screw to find the inside of the tap was a mess with leaking water and gunge 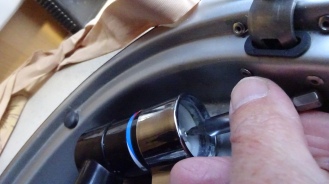 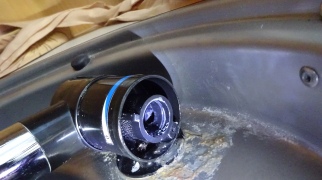 The problem is found, the micro switch was broken so on to remove the tap 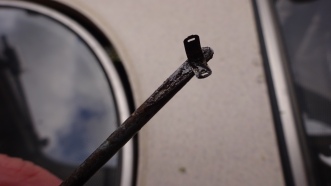 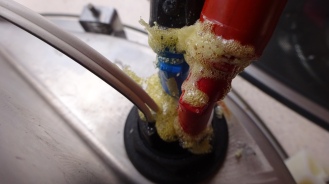 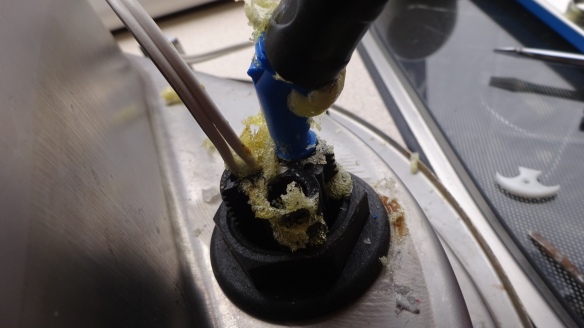 So just waiting for the new tap to arrive and that’ll be the tap sorted (fingers crossed), and as I now have two OK connectors I’ll get the first tap ready as a spare for the future.

Things pick up when I moved on the toilet as the flush works fine the cassette is clean so just needed a bit of olive oil rubbing round the seal so that’s two jobs completed.

Feet up now for a rest